Note, this adventure is currently incomplete. Please refrain from editing it until this notice is removed. Thank you.

Sewer Invasion is a 1st-level adventure that can be dropped into any location in the whole of Polaqu. It is designed to show the basics of what a Polaquin campaign is like.

The town is located near a major city, and as such has access to many more common amenities. However, after a sabotage of the sewer system by an enemy spy, strange and powerful creatures have been rising out of the sewers to attack. The adventure begins in a tavern.

The evening is calm and cool, as is to be expected on a night like tonight. However, the looks of doom upon the local's faces cannot be denied. They know that tonight, they may be killed by the same creatures that have killed dozens in the past weeks.

The PCs are free to buy whatever they want in this inn, except for water. Water itself is no longer available for drinking, which also makes the tavern particularly full, as there is little else to drink. As the PCs sit and drink, an slim and (relatively) beautiful raet woman in a long cloak approaches them.

As you sit and drink, a cloaked figure approaches you. A quick examination reveals her to be a raet. She leans over to you and says, "You look like a fine group of adventurers. I have learned the secret of these attacks. Please, may I sit?"

She describes that the attacks can be stopped by turning on a valve that was closed in the sewer system. However, the valve is located deep within the sewers, and many monsters are likely to lurk there. The PCs probably have some questions to ask the woman. The following are answers to some of them.

Assuming the characters accept the woman's mission, she informs them that the easiest way would be to enter the sewers through the entrance near the edge of town. The valve in question is called valve E-32.

For the entire Sewer area, use this map. Each square is 5ft. Click to enlarge. 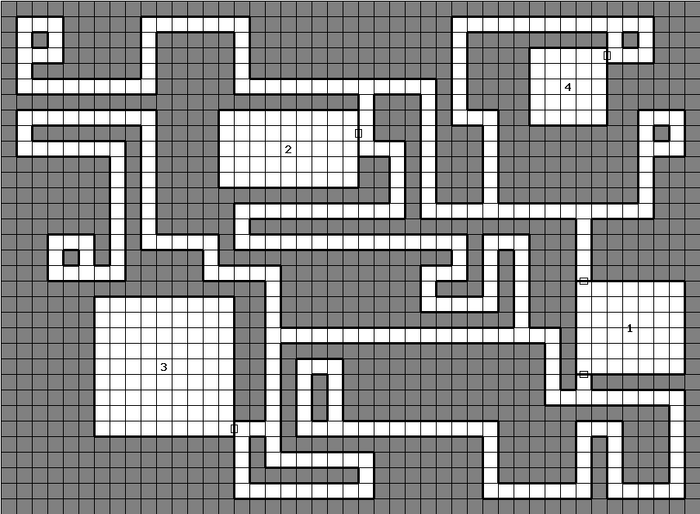 The adventurers arrive at the room marked 4 on the map. Read the following text to them:

It is pitch black in the sewer. The stench of human waste and rats fills the chamber, and the floor is covered in sickeningly dirty mud.

If the characters light torches or similar, they are attacked by four dire rats. Despite their low intelligence, they recognize a meal when they see one, and they attack the heaviest character (they have the most meat).

Community content is available under CC-BY-SA unless otherwise noted.
Advertisement